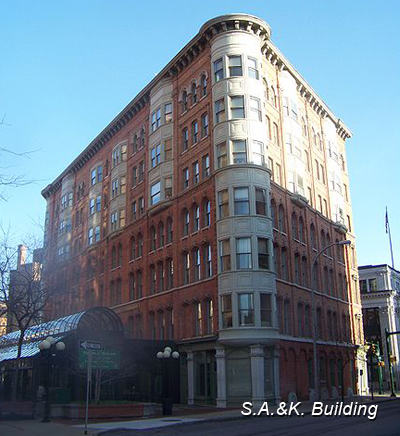 Cottrell Land Surveyors, PC, located in Manlius, NY, is an over eighty-five year, three generation business providing a full set of survey services to Central New York and beyond.  Our timeline follows the path of our three principals...

After surgery ended a short, but illustrious baseball career, our founder, a graduate of Syracuse University with a degree in Civil Engineering, interned at the City of Syracuse Engineering Department until obtaining his professional Engineering license in 1923.  In 1929 he opened his own land Surveying practice on the second floor of the S.A&K. Building (pictured here) until his untimely death in 1947.

Fortunately Ensign's son, Jack, also a Syracuse University graduate in Civil Engineering, obtained his license to practice land surveying the preceding year, having returned from service in WW2 in the Army-Air Corp., and was able to continue the business without disruption.  He continued the operation from the S.A&K. Building until 1949, at which point he moved the business to an office complex at his residence in the Manlius suburbs.

In 1946 Jack's son, Gary, was born and in due course completed his education studies also at Syracuse University with an undergraduate degree in Civil Engineering and a Masters in Business Administration. After tours of duty with the USAF in Vietnam and Germany, he rejoined his father in 1975, obtaining his license in 1978.  Since then the business has undergone several building expansions to house the ever accumulating addition of maps and records.  In 1990 the business was converted to a professional corporation.  Jack died in December 2012, leaving Gary with sole operation of the business.